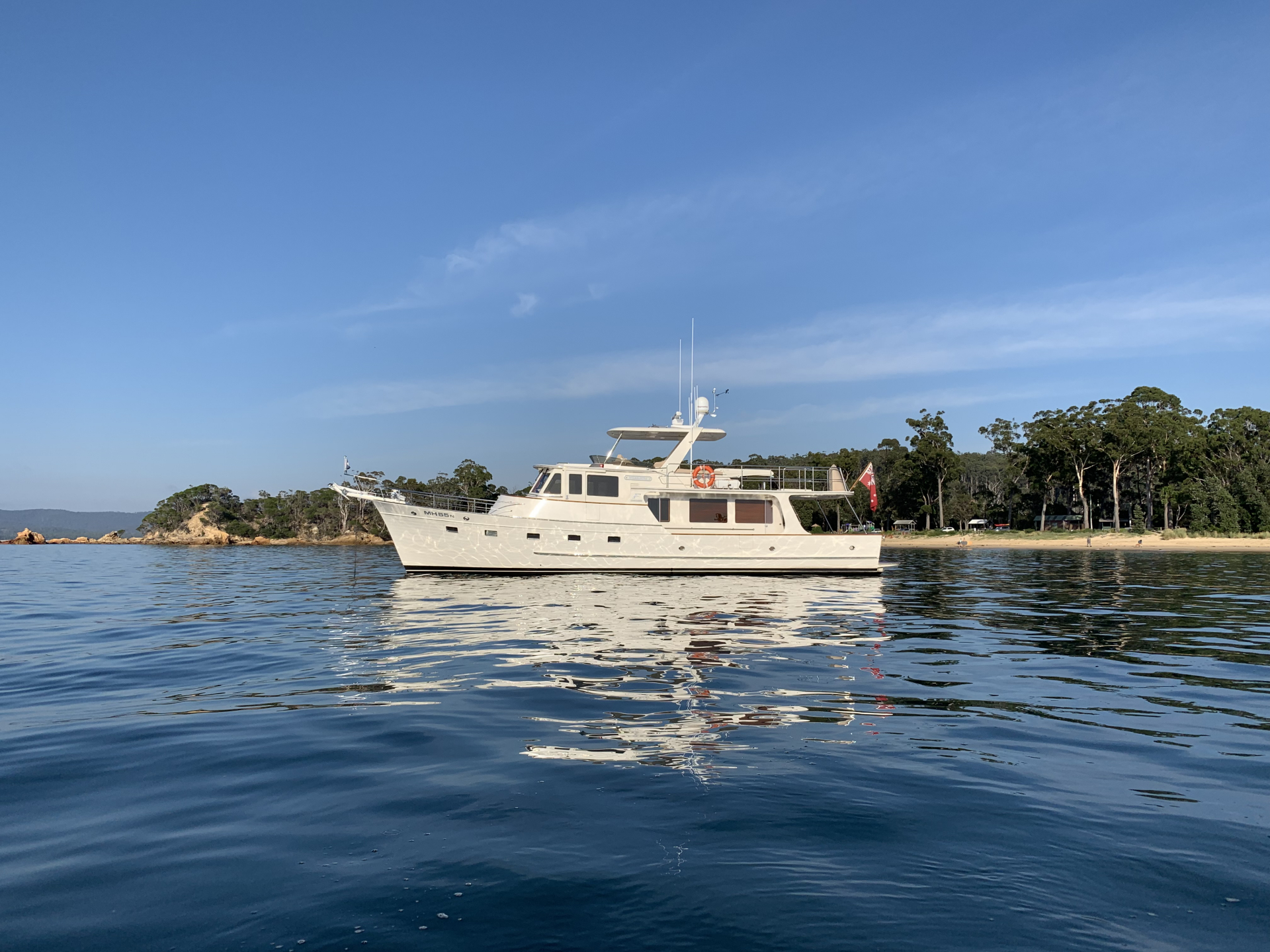 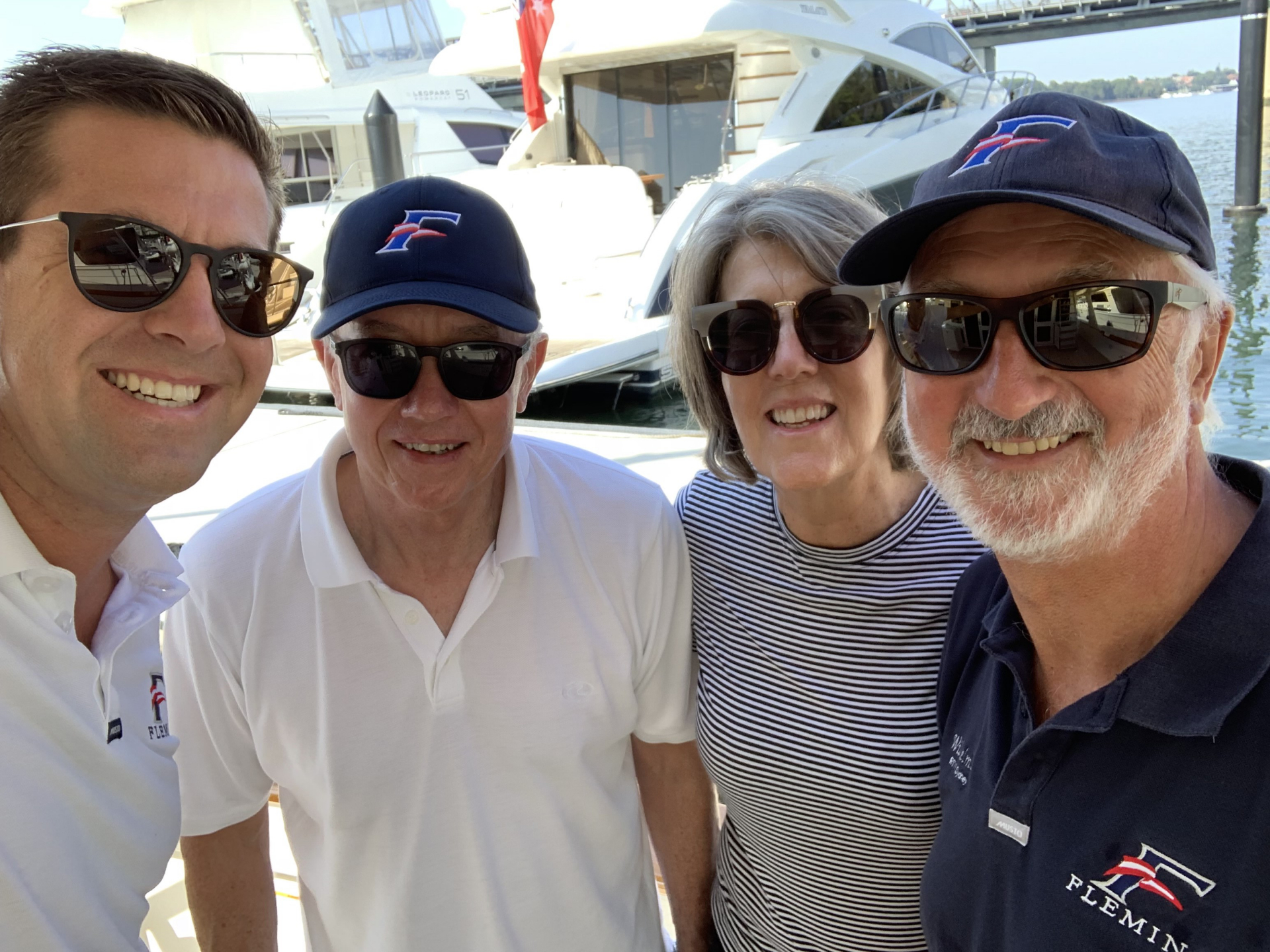 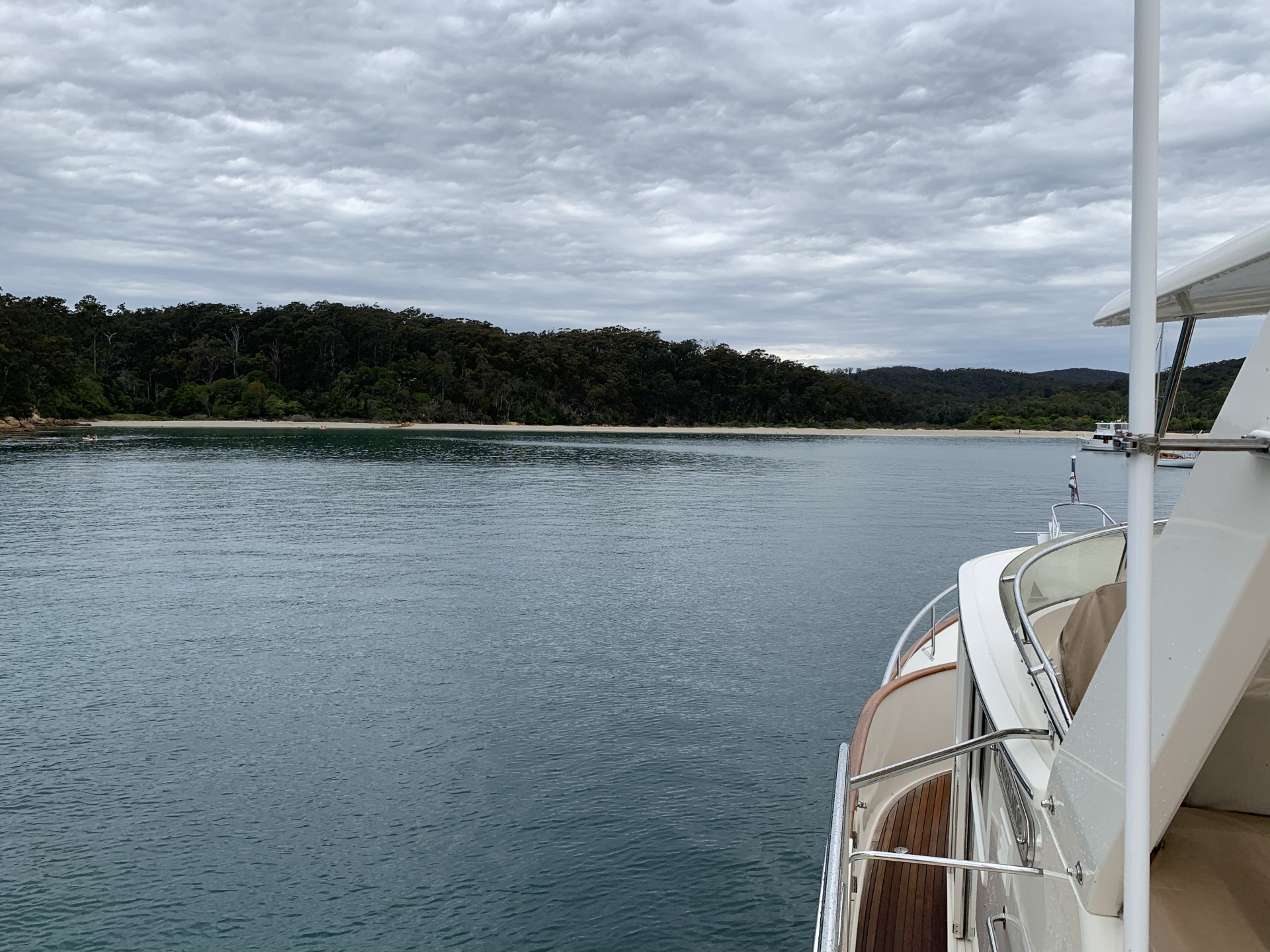 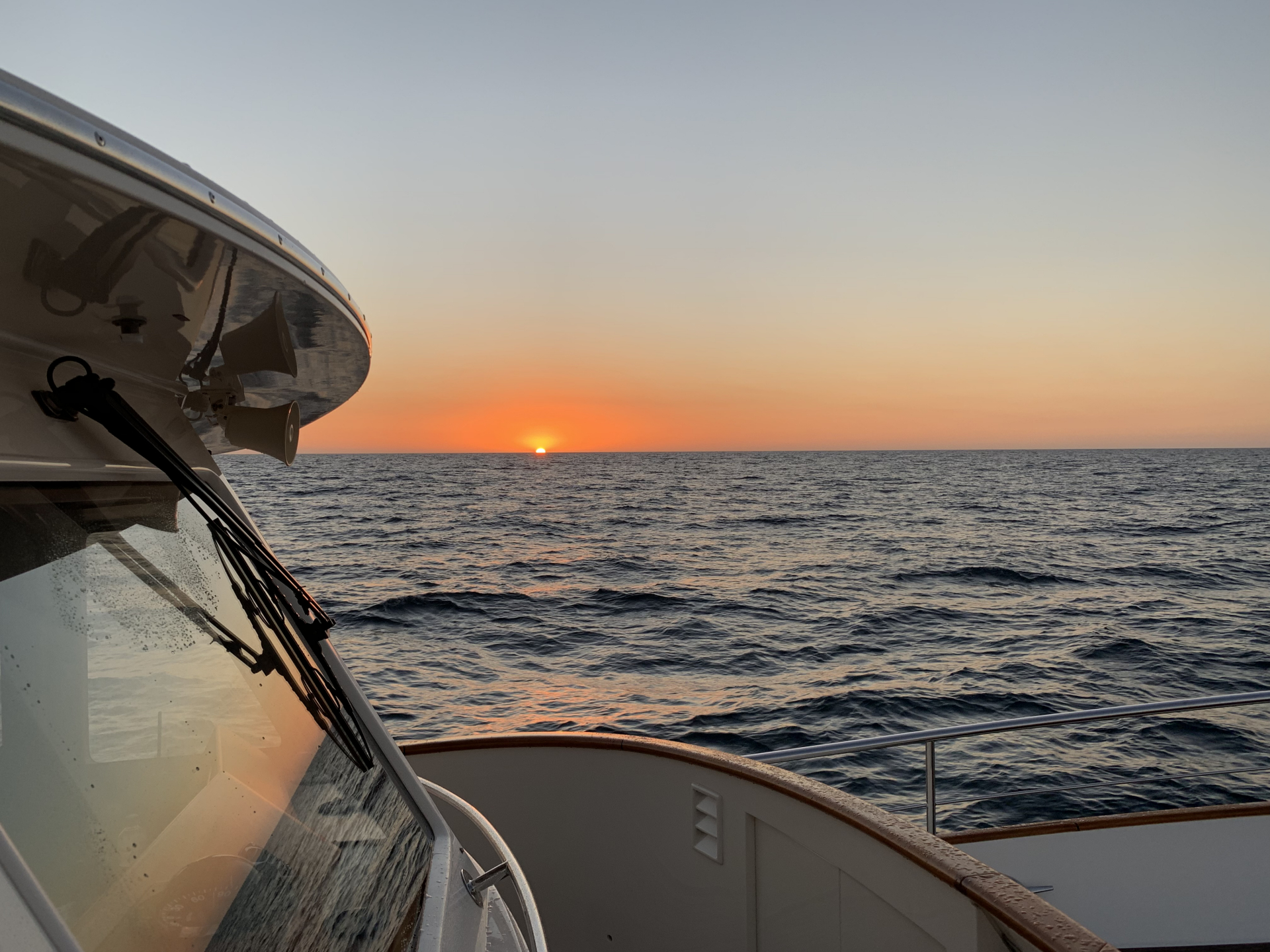 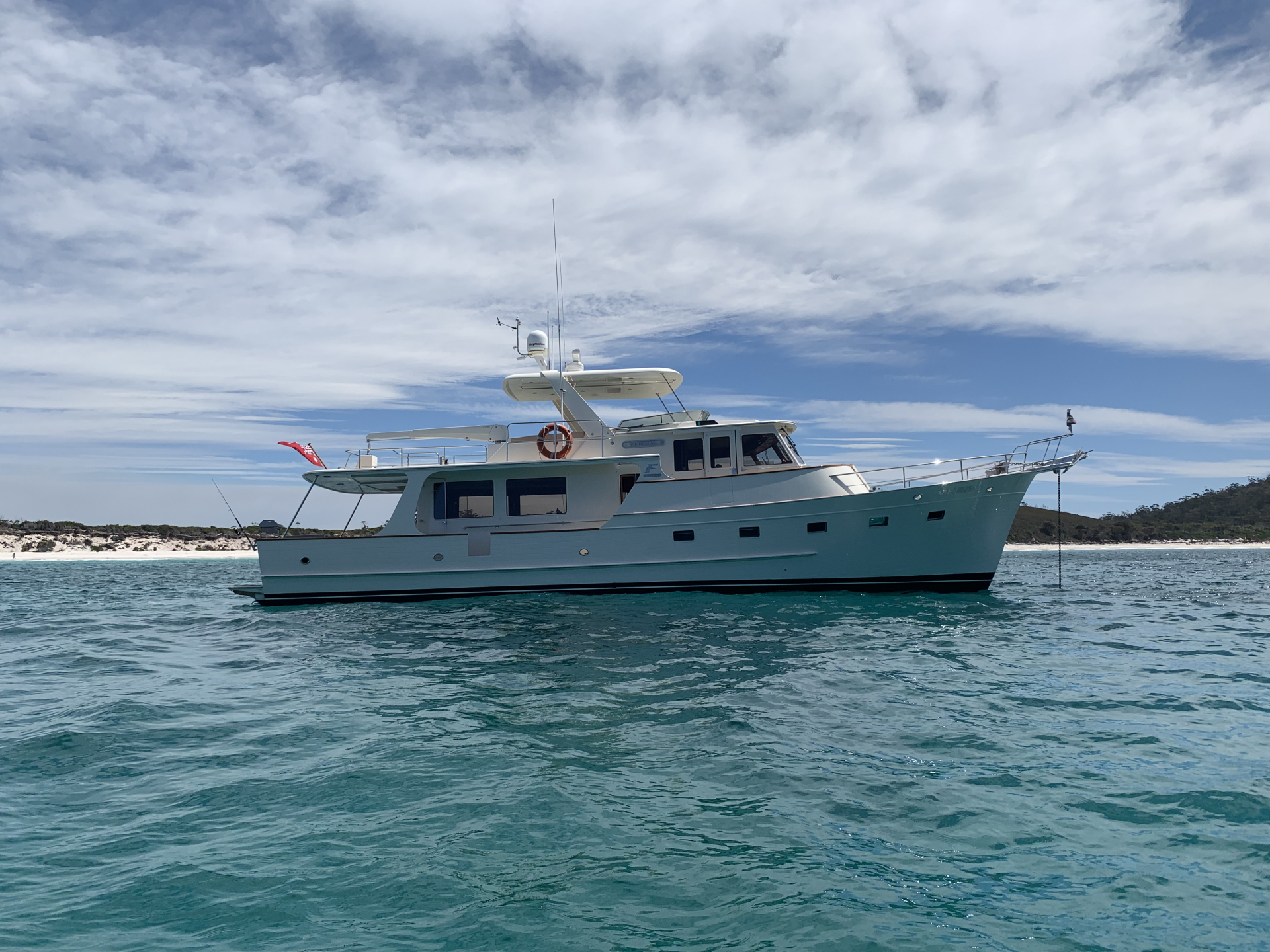 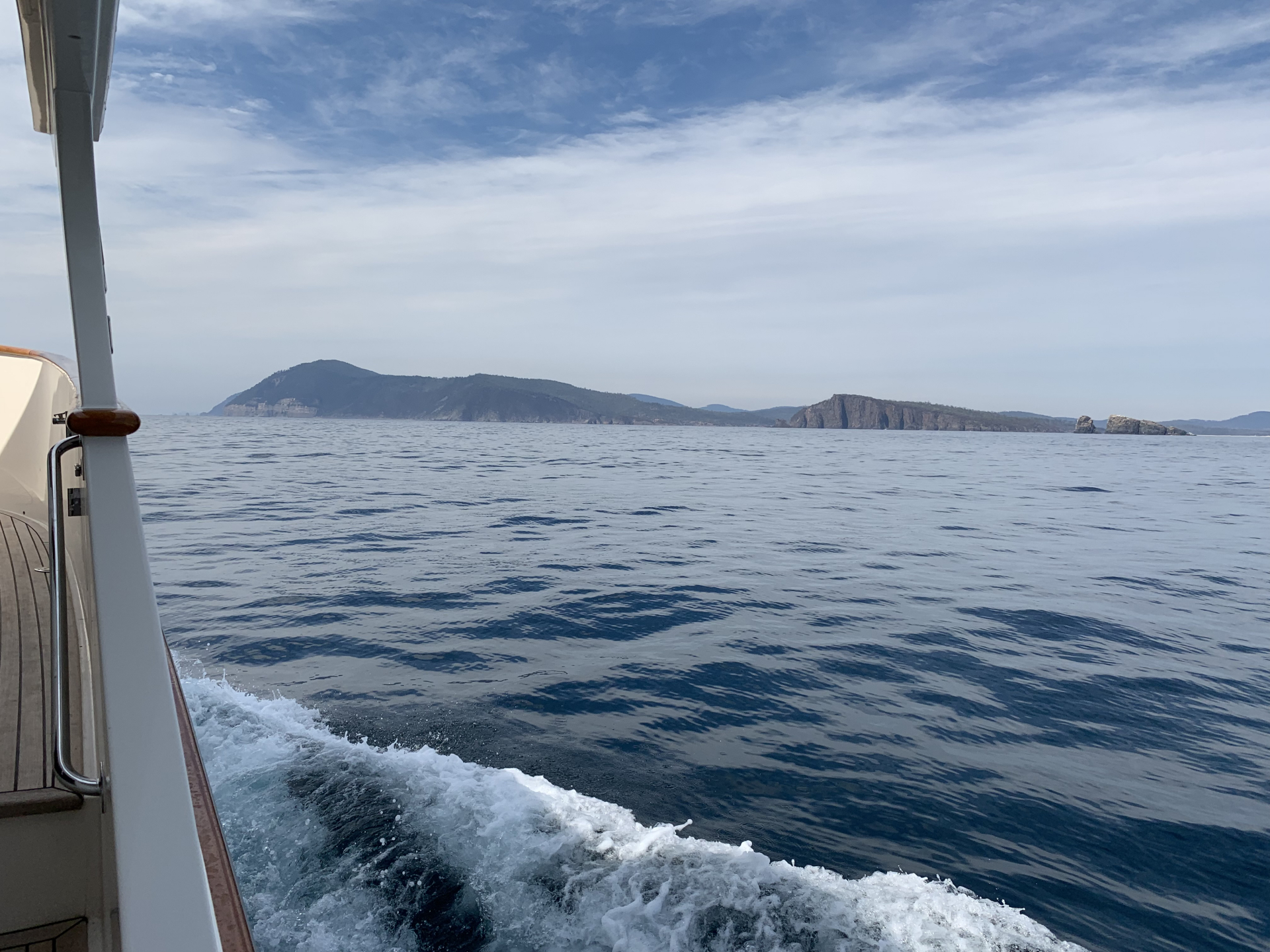 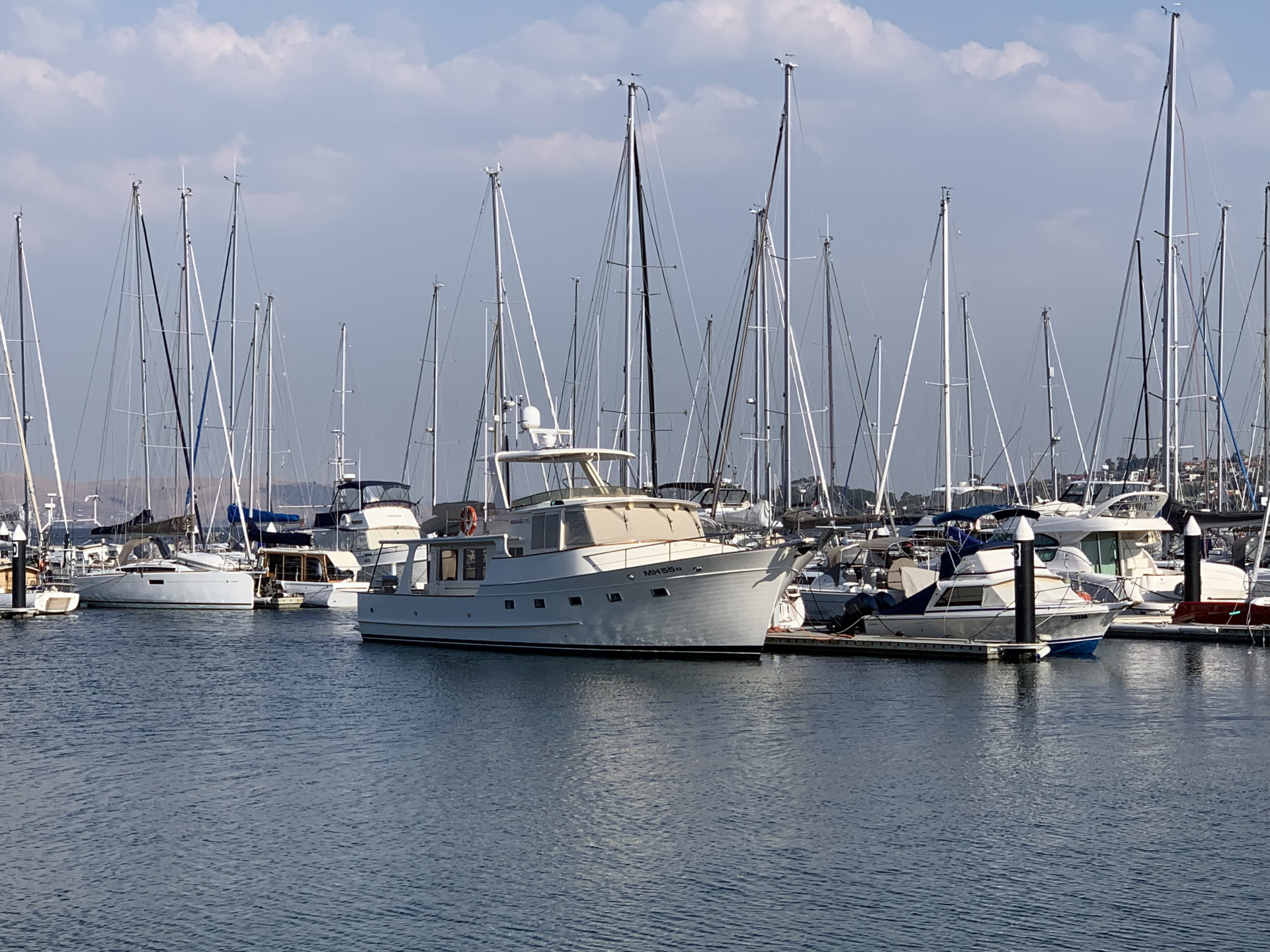 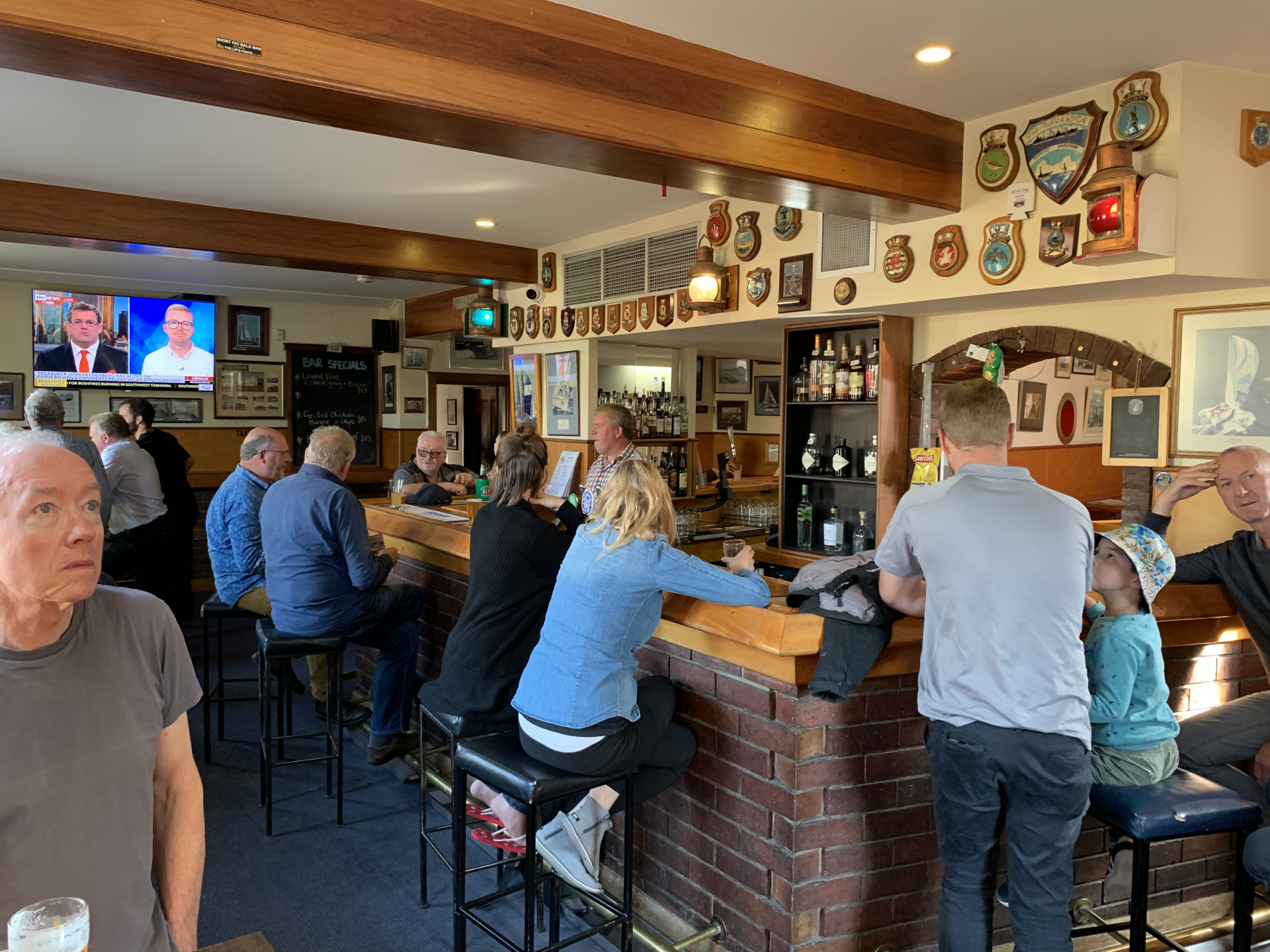 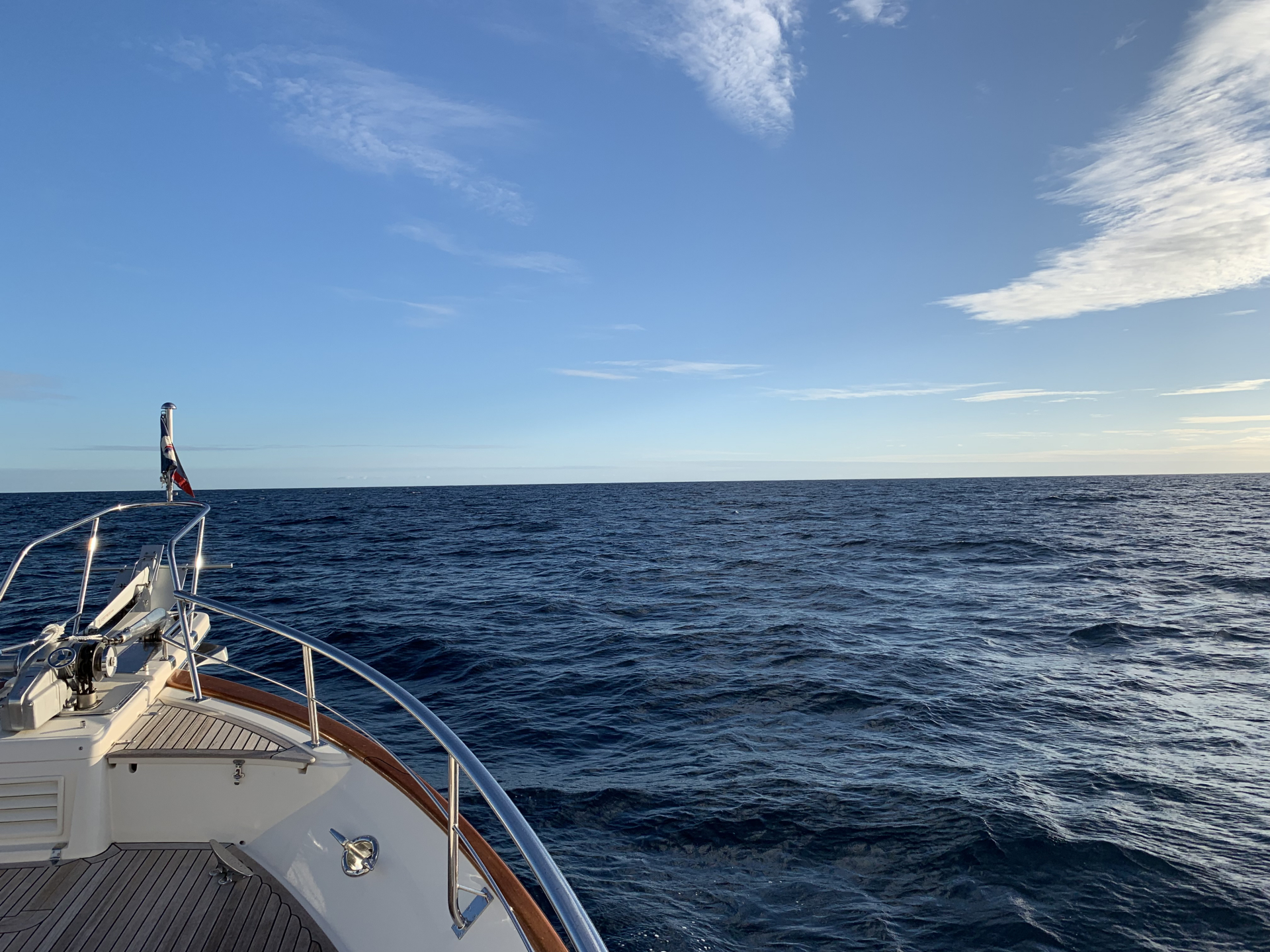 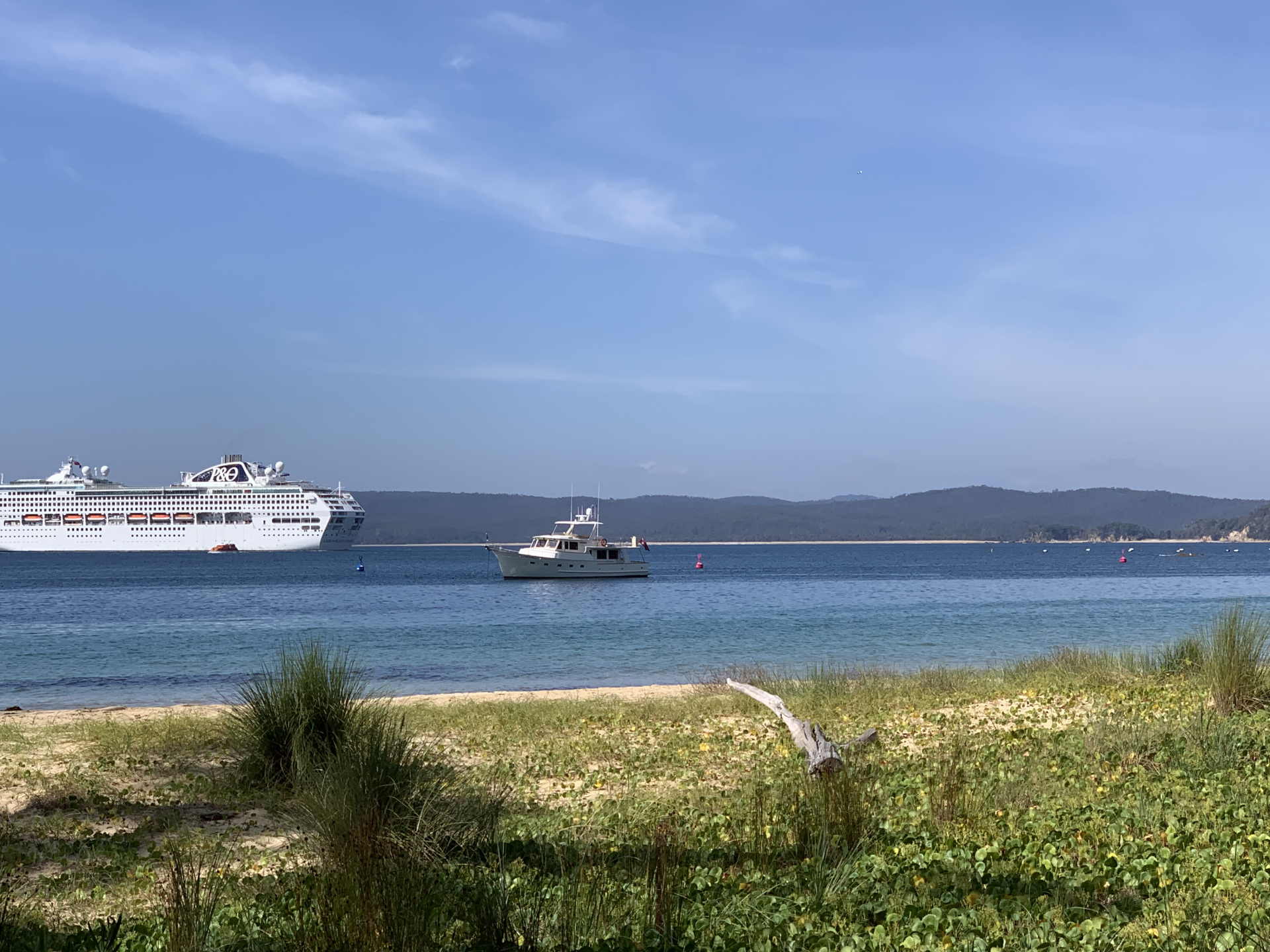 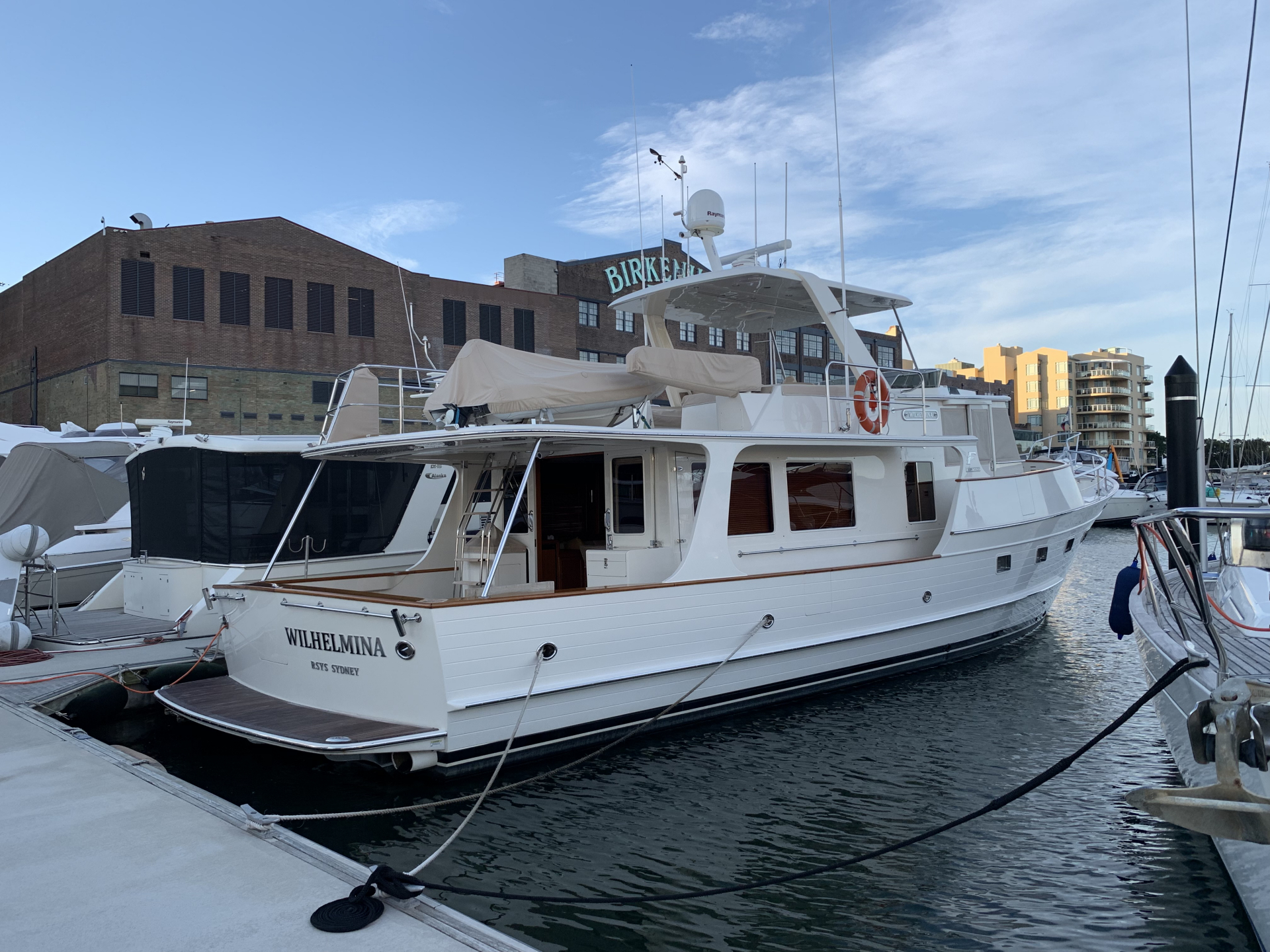 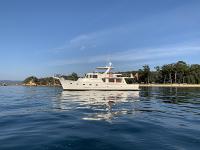 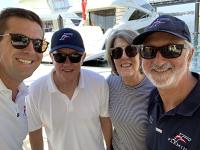 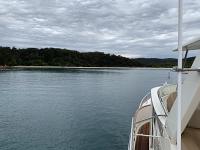 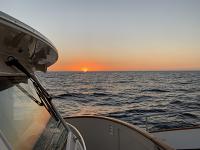 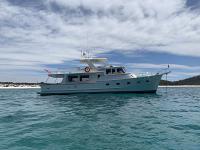 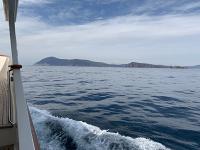 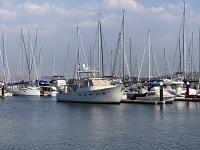 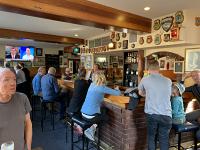 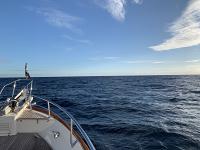 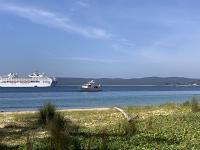 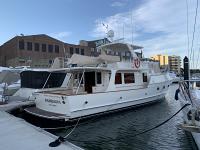 On Australia day, 26th January, 2019, we departed Sydney Harbour for Hobart to see the bi-annual Tasmanian Wooden Boat festival from the 8th -12th February . On board were wife Karen who had never been more than 5o miles on any boat offshore, old sailing friend Rob, and Sam Nichols from Fleming Yachts Australia.

We headed south along the New South Wales coast with land on starboard and the some times dangerous Tasman Sea to port.  Karen was only sick once, a great effort for her, and 22 hours later we arrived at Eden at the southern end of NSW having enjoyed reasonably calm seas.

At Eden we added two crew from Karen’s schooldays; enough provisions to get to Antarctica, and  set off down into Bass Strait following the path of the Sydney Hobart sailing race that had been held  the previous Boxing Day. The weather Gods smiled upon us; much appreciated by all. I had previously crossed Bass Strait in another production trawler style boat, however that journey had been much less enjoyable due to the boat being lighter with more windage, no keel and no stabilizers. The weather did not help that time; the boat tried hard to broach; a most unnerving experience. Needless to say not the Fleming!

We kept hourly logs, plotted on paper charts and held 3 hourly watches so there were always two people in the pilothouse. 36 hours later we arrived at Wineglass Bay on the Freycinet Peninsula with a happy crew. The calm seas are very unusual but with just one night at sea there was plenty of time to watch  dolphins and enjoy the seating on the forward deck. Due to the distance VHF radio is only available for a limited time over the Strait; even friends watching progress on AIS were slightly alarmed when we went off-piste for over 24 hours.

Good food and wine assists when at anchor; so after sleep we steamed past  Schouten and Maria Islands viewing the old convict settlements along the way. 12 hours later we arrived at “the Duckpond” on Bruny Island 2 hours from Hobart in the D’Entrecasteaux Channel at the end of the Derwent River.

Four days at the Wooden Boat Festival pouring over the beautifully preserved timber boats often built of Huon Pine, tall ships, couta boats etc was a feast for grey headed people with grey beards and of a certain age. So many lookalikes!

Karen and I then did a land based tour to Coles Bay and Launceston and visited MONA (the museum of old and new art)  a fantastic collection boosting tourism to Tasmania. We stayed for a month in the area, hosting friends from Sydney and Melbourne and cruising with another Sydney couple on their new 40” Bluewater sail boat.  The Miele washer and dryer were very handy as we were effectively an on water airbnb We cruised all over Bruny Island including the cheese factory, Quarantine Station (which fumigated returning WW1 soldiers to minimize Spanish flu risk to the locals) and villages on the mainland including Cygnet and Port Huon.

The plan was to also visit Port Davey in the SW part of Tasmania. Unfortunately this natural unspoilt paradise was not available to us as the roaring 40’s wind were mostly over 30-40 knots and not comfortable even in a Fleming.

It all has to come to an end at some time. In the meantime our son had decided to get married back in Sydney so with three weeks notice; hastily booked domestic flights , our  planned return dates were delayed by a week or so.

The return journey through the Dunalley Canal cuts 30NM from the trip down Tasman Island which we had followed on the way down. As the weather was starting to look very ordinary in the coming days in Bass Strait, we returned to Wineglass Bay, stopped a couple of hours for dinner then made a dash for Eden on the mainland. That journey elapsed time was 48 hours from Hobart and two nights at sea. Again the weather Gods were happy, with the return trip even calmer than on the way down; we were indeed blessed. Annie our new crew member on the return visit was used to sailing in the Hamilton Island race week; she could not believe how relaxing this cruising on the Fleming was.

We dropped Paul back in Eden and enjoyed his and Claire’s hospitality once again.. After a huge sleep it was  a 15 hour cruise to Huskisson at Jervis Bay where we had friends come aboard for drinks. Next morning a 3.00am start for the final leg to Sydney where we arrived at Birkenhead Point at 6.oopm. Along the way 4nm off Bondi Beach Sam cried out” Shark,” a white pointer was basking two metres from us!

40 nights on the boat, 1500 nautical miles, 5500  litres of diesel, 11 crew over the two trips, plus many visitors on board, meant that we had a wonderful journey and fun with friends. The Fleming 55 made it all possible.